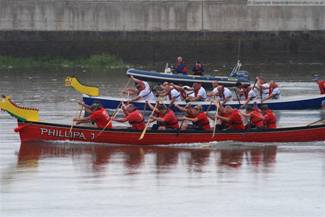 Barnstaple Pilot Gig Club ran their third Dragon Boat Festival on the Taw on Sunday, with local crews competing against crews from Bude, Exeter and Saunton for some spectacular racing on the Taw.

Other crew taking part were : BPGC, Bude Pilot Gig Club and the Eastleigh crew.  The ‘Over and Above’ charity provided the PA system and music for the event, and Safety Boat cover was provided by Barnstaple Sea Cadets crew.