Barnstaple Pilot Gig Club was founded in January 2010 by a small group of keen gig rowers who felt it was about time Barnstaple had its own pilot gig club, in this fast growing traditional sport. 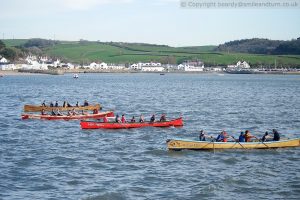 After founding the club a training gig was purchased from Cattewater Pilot Gig Club (Odessa) to enable potential new Barnstaple members to get a taste of the sport and begin on water training.

This created a large amount of interest and within 12 months the club had over 50 members, this number is still growing year on year.

The club started out rowing from Appledore as there was nowhere to store the gig in Barnstaple. This was until Bernard Maskill offered the club the use of his shed at Brunswick Wharf. This meant that we could store the gig safe and dry and start rowing on the river Taw. We have now had to move from this shed due to construction and are now based on Mill Road (next to the Rugby Club) thanks to the generosity of Mr David Gliddon.

To enable the club to compete competitively a Cornish Pilot Gig Association certified race gig was needed, and other various ancillary equipment which is vital to take part in gig rowing. Various fundraising events were held to help raise the much needed cash.

In November 2010 the clubs first race gig was ordered after a generous donation from the Keith Abrahams Charitable Trust.

The new gig was built throughout the winter and the club took delivery in March 2011.

This gig would allow members to participate in numerous regattas across the South West and beyond, it would also allow for more on the water training for more clubs members.

On the weekend of receiving the gig, a blessing ceremony was held and Keith Abrahams named the gig “Lady Freda” after his late wife.

Shortly after this, Lady Freda was shipped off to the Isles of Scilly along with several club members in order to take part in the first ever competition at the World Pilot Gig Championships. 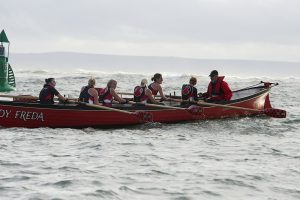 Toward the end of 2011 the club decided to sell Odessa and purchase a plastic training gig.

In August 2012 we founded the Barnstaple Pilot Gig Club Junior Section, who are now known as the "Barum Blades". We currently have a very keen group of youngsters who train together at least once a week - tides and times willing.
They will no doubt be competing at the World Championships in years to come and will be representing us in local regattas.

Early in 2013 the club purchased their second plastic training gig and continued fund-raising for a much needed second race gig which was needed to accommodate the clubs growing membership.

Toward the end of 2013 the club got a second racing gig, thanks to another generous donation from the Keith Abrahams Charitable Trust. This additional racing gig would allow even more members to compete in the many regattas and competitions.

As a club we aim to foster a spirit of openness, fairness, friendship and inclusivity, where all members aspirations are catered for, whether this is for social rowing, rowing for fitness or for competition. This is in line with the fine traditions of our sport where keen competition on the water is matched by fellowship.

Our belief is that by making the club fun, with a friendly and helpful membership, the likelihood of racing success is greatly improved. Safety and fun come first, competitive success will happen thereafter!

The club will encourage the formation and development of both male and female and mixed crews of all ages and abilities, all of whom will get coaching and assistance appropriate to their level and their aspirations.