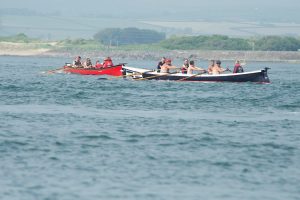 Five Gig clubs took part in the annual Two Bridges race on Saturday, with seven boats in the men’s race and six in the ladies race.
Conditions were good for rowing, with calm seas and light winds. The event started at Bideford new bridge, with the men’s crews battling against the rising tide on the river Torridge until they turned into the river Taw, where the rising tide helped to push them towards Barnstaple. Appledore lead the pack most of the way in ‘Whitford’ to win the men’s race, with some exciting close racing behind them. Barum’s ‘Lady Freda’ had a close race with Bude’s ‘Bedehaven’, eventually finishing in fourth place with the second Barum boat ‘Nipper’ in seventh place.

The waiting ladies crews took over the boats after the men crossed the finishing line at Barnstaple new bridge, which was also the starting line for the ladies race. The ladies raced back to the Anchor slipway at Appledore, again led by Appledore’s crew in Whitford. Barum’s ladies were third in ‘Nipper’.

Appledore have now won two years in succession, will next year make it three? 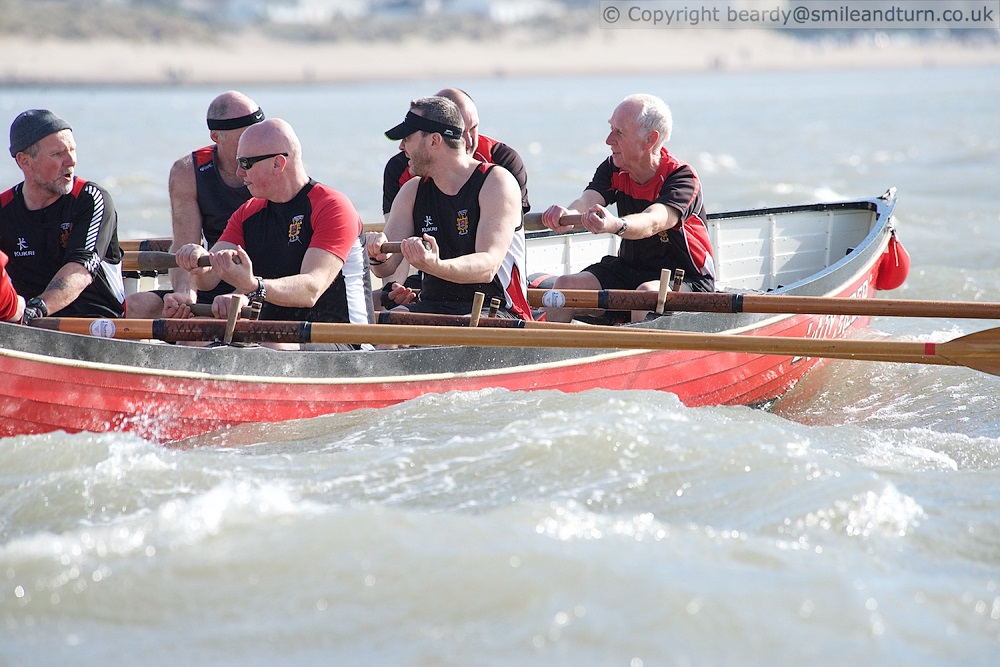 Barnstaple and Torridge Pilot Gig Clubs both sent crews to Saltash on Saturday to take part in Caradon Gig clubs annual regatta. Normally this is a Vets and Mixed crew event over two days, but for technical reasons this year it was an ‘all comers’ event. Although the sky was overcast, winds were light and the rain held off all day so conditions were good for rowing.
The start line was next to Brunel railway bridge, and the first leg was a long haul up the Tamar to the first buoy for a stroke side turn, quickly followed by two more stroke side turns until the boats were heading back to the finish line at the rail bridge again. Saltash Town fete was on at the same time, leading to a carnival atmosphere along the shoreline with a multitude of colourful stalls, children’s attractions and live music from Saltash town band and local pop groups and singers.
There were 26 boats taking part from many Cornish and Devon Clubs; Barnstaple and Torridge entered one boat each. Individual race results were as follows:

Caradon Gig club excelled on their home waters, winning seven out of eleven races, and placed in the top four for the four remaining races. All of the rowers taking part enjoyed a good days racing with lots of shoreside entertainment as well, so a good day was had by all. 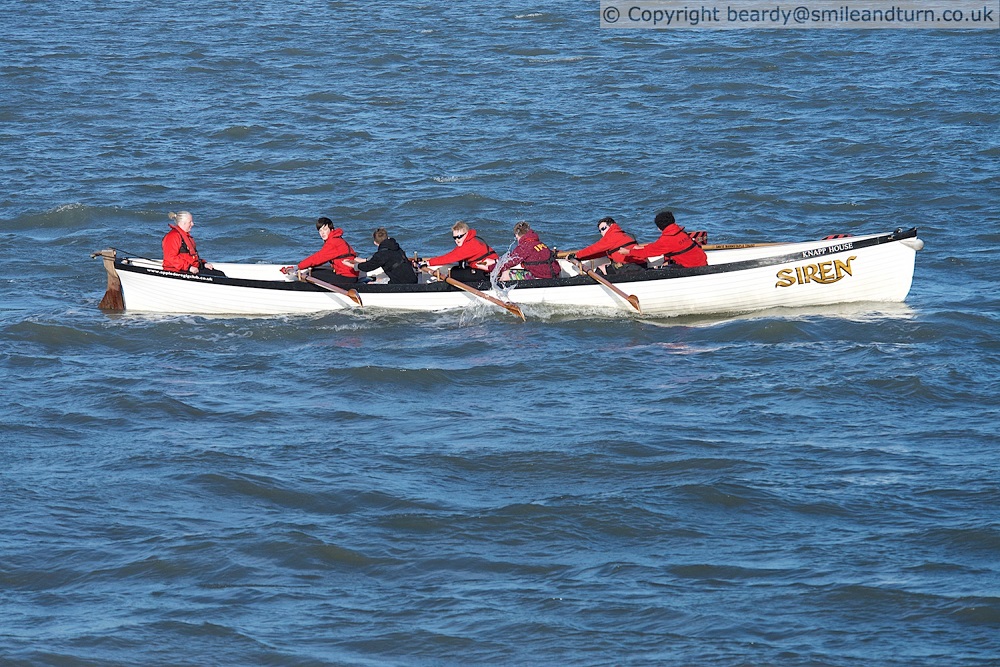 North Devon was well represented at the annual Caradon Three Rivers Race on Saturday 5th March, including boats and crews from Appledore, Barnstaple, Ilfracombe and Torridge amongst the 64 boats that took part.

The ladies raced first on the five and a quarter mile figure-of-eight course, starting upriver from the Brunel railway bridge rowing on choppy waters into a strong headwind and heading north to the first three bow-side turns. They returned to the bridge and continued past it towards the estuary for the next two stroke-side turns before returning to the finishing line adjacent to the Union Inn. The race was against the clock since it was run in four heats of 18 boats, with a two or three minute interval between each heat. Nevertheless there were many exciting tussles as groups of boats raced each other for the finishing line. The men’s race followed the same course after the ladies race was completed.
Barnstaple Pilot Gig Club entered two ladies crews and two men’s crews in the boats Nipper and Lady Freda, and the winter training programme on the Taw clearly bore fruit. The crews coped well with the extended rowing at race pace and the cox’ns executed some excellent buoy turns allowing the Barum boats to pass a number of other boats on the buoys. The ladies and men’s crews times were added together to give final club placings; Nipper’s time was 50th overall and Lady Freda 51st, compared with the 2015 placing for Nipper (only one boat entered) of 56th.

Barnstaple, Torridge, Appledore and Clovelly Pilot Gig clubs all attended Rock Rowing Clubs Gig Boat regatta on Sunday at Daymer Beach, on the Camel estuary near Rock.  28 gig boats were assembled on the beach by 9.00am, but at that time the river was blanketed in fog.  This slowly cleared in time for the Ladies Veterans race to start at about 10.00am; unfortunately the fog rolled back in again shortly after the start so that all the racing boats were lost in the mist to the spectators on the shore.  Fortunately the cox’ns were still able to see the buoys marking out the course and no one got lost.  Some 25 minutes later the leading boats in this race emerged from the fog to cross the finishing line as they approached the beach.
The fog finally cleared altogether for all of the remaining races, and it turned into a glorious summer’s day providing fine entertainment for the large crowd of visitors, locals and rowers now assembled on the beach. The Ladies Vets were followed by the Men’s Vets, Ladies B crews, Men’s B crews, Juniors U14 and U16 crews, Ladies A, Men’s A and a Novelty Mixed crew race right at the end.
Because of the large number of entries, some of the races were run as two heats, leading to a complicated scoring system which left a few competitors scratching their heads trying to puzzle it out.  The Barnstaple crews generally came about middle of the pack, except for the Ladies Vets who were well placed in the leading group of boats to cross the line. 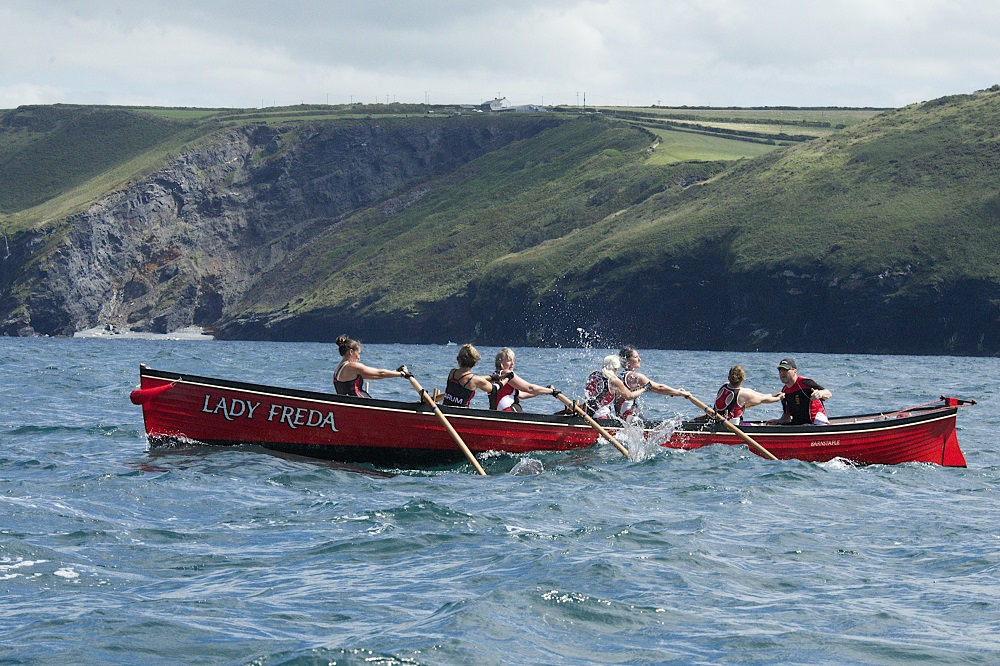 Barnstaple Pilot Gig Club sent three crews (men’s, ladies and juniors) to the historic Docks in Bristol on Saturday 2nd April for the Bristol Club’s annual regatta, and two Supervet crews to Appledore for the annual Supervets championships. Both events used plastic training gig boats because most of the wooden racing gigs are en-route to the Scillies for the World Championships in early May, so crews were allocated boats to race in just prior to the actual race.
The Bristol event took place in the historic harbour area, with the start line to the west of Brunel’s SS Great Britain and the finish line adjacent to the sea lock entrance to the River Avon. It was a full-on sprint event past the SS Great Britain, the rowing club slipway and the popular public quayside to the finish line, approximately eight minutes hard rowing. The sun shone and the watching crowds were entertained with some thrilling racing; crews were set off two at a time for timed races, and the fastest six crews in each category went on to the semi-finals and finals to determine the winning race order. Unfortunately Barum just missed-out on qualifying for the semi-finals, but had better fortune at Appledore.
There were twenty-four Ladies crews and twenty-four Men’s crews at Appledore on Saturday, racing in elimination heats of six boats, starting at the Fish Dock and finishing at Churchfield car park breakwater. The first three crews in each race went on to compete in the semi-finals on Sunday. Barum’s Ladies crew were very unlucky not to qualify on Saturday, missing third place in their heat by less than two metres. The Barum men’s crew easily qualified on Saturday, beating the respected Appledore crew in their event, to go on and take second place in the Sunday semi-final and win a place in the final race. Unfortunately there was a lot of jostling prior to the start of the men’s final for the preferred inside channel, and as a result Barum’s crew clashed oars on both sides and were boxed-out by the other crews. They stayed in touch with the pack all the way to the finish line, with Teign A just getting ahead of Appledore to take the trophy. Final positions were: